Hello there adventurers! Here is my character creation guide for the D&D 5E Battle Smith Artificer! The new Artificer class can be found in Eberron – Rising from the Last War and what better way than explore character creation for this new class than to also include a new D&D 5E official race, the Warforged! Below you will find a video that takes you through the process of building a Battle Smith, step-by-step, and advancing this character all the way up through level 10. You will also find PDFs of this character for all levels and an entire backstory that introduces Delta 3, the Warforged Artificer!

With this in mind, you do not have to be playing in an Eberron setting to use this character, but be sure to work with your Dungeon Master if you plan on bringing a similar character into a campaign. Being a Dungeon Master myself, I always allow players to explore their imagination and would have no issues incorporating the Warforged Artificer in my campaign even if it is set in a different world such as Ravnica, Faerun, Dragon Lance, or a homebrew creation. Also, I believe that this character is Adventurer’s League Legal but only if you are playing in an Eberron setting.

Our first level Battle Master Artificer is a Warforged by the name of Delta 3. Delta does not remember all of his past, so life begins for him at a point where he was hired by an old gnome named Gnorbitt Nackle. Gnorbitt had a small secluded shop in a run-down part of the city that had a slightly higher crime rate. Gnorbitt’s shop was simple, selling standard equipment to cityfolk and adventurers that would pass through. However, the real magic was in the private shop behind the counter where he worked on unique gizmos, gadgets, and entwining arcane magic into his incredible inventions.

Gnorbitt’s initial intention with hiring the sentient warforged was for protection. Although Delta does not remember his days from the “Last War”, he does have an instinctive ability as a protector and his skills with a weapon and shield were impressive to say the least. Adding to the arsenal, Delta 3’s arm was fitted with a small cannon that could shoot fire bolts up to 120′. With Delta at the ready in the Tinkerer’s shop, the thugs in the neighborhood steered clear and left Gnorbitt alone. While Delta does not recall his previous life, Gnorbitt told him that he was a heroic warforged soldier in the “Last War”. 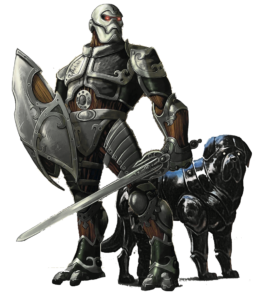 However, Delta 3 was more than a soldier and took a particular interest in the Gnome’s creations. For decades, the gnome and warforged worked side-by-side as Gnorbitt passes down his knowledge of smithing, tinkering and the ability to understand and entwine arcane energy into small, non-magical objects. The two developed a father-son type of a relationship, in which Delta, to this day, still refers to Gnorbitt as father.

When not tinkering and fixing things, Delta 3 took a particular interest in painting. Painting provides Delta with a quiet, fulfilling hobby that allows him to express himself. After a few decades, Gnorbitt passes away from old age. He leaves the shop and all of his belongings to Delta 3. Delta, now facing a loneliness he has never known, decides to step out of the shop and seek out new friendships and a sense of purpose for his life.

Thank you for hanging out, I hope you enjoyed this character creation!
On to the next!
—wallyd