Cleric and followers of an evil deity has dedicated a shrine to manipulation, death, and illusion in honor of their evil god. This trickster deity combines poisonous hallucination gases to manipulate and torture victims. They slowly end their own lives by running or staying to fight the horrific warped images. Will your party survive this deadly encounter?

You enter a room with large holy symbols painted on the East and west wall and a larger version of this symbol in faded paint on the floor in the center of this room. The holy symbol is a white, jawless skull with a black star background. There is a 10-foot tall statue in each corner of this room.

If the PCs want to know what deity the holy symbols are or what the statues are, allow a DC 12 Religion Check. On success, they will recognize this as an evil Trickster god of Lies, Death and Illusion.
On a roll of 18 or higher, they may also recall lore that this deity enjoyed manipulating the minds of individuals through magic and illusion until they considered taking their own lives.
After their first action, have the players make a DC 12 Perception check. Success will notice that the air in this room has a tangy taste or smell to it. On a roll of 25 or higher, they will also notice a wavy “glitch” in the middle of the North section of the wall (an illusion masking a passageway). 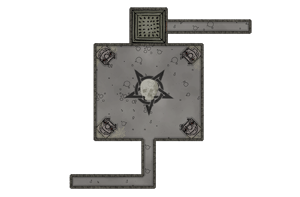 Immediately after the Perception results, all characters must make a DC 15 CON saving throw. Those that succeed will need to make the saving throw again at the end of every turn (or at a length of time determined by the GM)

On failure, the character is poisoned and will begin to hallucinate. They will see the statues warp and distort, becoming demonic entities. The statues look as if they are wraiths attacking them. Also, characters under the effects of the poison will no longer see an open passageway to the South. However, they now see a passageway to the North (previously masked by an Illusion).

Once poisoned, characters will be under its effects for as long as they stay in the room. Once out of this room, the poison will subside in 1d4 minutes.

Roll for Initiative (to better organize the characters actions)

Poisoned characters may only do one of two things. Run in Fear or Attack the statues (they look like demonic wraiths under the poison’s influence).

Those that ATTACK proceed as follows: Attacking a statue is an auto hit that does no damage to the statue. However, the poisoned character will hear the evil laugh of the deity and take 2d4 Psychic Damage for every hit against the statue. Each round a PC may decide to continue their attack on the statues or run through the Northern passageway.

Those that RUN proceed as follow: Running through the North wall (an illusion masking an adjoining room), they will immediately fall into a pit trap and take 2d6 falling / bludgeoning damage and 1d8 piercing damage. They will at this time be out of the area of the poisonous gas and the poison will subside, as mentioned above, in 1d4 minutes.

Unpoisoned characters may take a normal turn, but must repeat the DC15 Constitution Saving throw or fall under the hallucinatory effects of the poison.

Unpoisoned characters that witness someone running through the illusionary wall to the North, can make a DC 10 Arcana check to determine it is an illusion (if they haven’t figured it out already).

At the bottom of the spiked pit trap is a door that will lead them to the next area of the dungeon.

If you enjoyed this Trap idea, join me! We have a Discord and a Reddit Group that are always discussing Puzzle and Trap ideas for Dungeons & Dragons and TTRPGs.

Here’s a full write up of a trap idea started by “Nobody” and expanded on by the team on the Wally DM Discord.

On to the next!
—wallydm