Bacon is delicious. The smell of bacon can make one’s mouth water. Being covered with the alluring scent of bacon grease is not only hard to wash off, but could result in attracting nearby monsters that savor the flavor of bacon. What will make matters worse, is not dealing with the grease issue. Leaving it alone may spawn a bacon grease ooze. Welcome to Dungeons and Dragons™ and a homebrew bacon-infused trap that will make your players hungry but also shake their head in disbelief.

The adventurers find themselves in a palace and have wandered into an empty throne room. A majestic throne sits on top of a raised platform overlooking the room. The PCs may have heard rumors that the noble’s throne provides a magical, charismatic blessing.

Possible Lore: The king or ruling noble grew weary of castle employees sitting in his prized chair while he was away from the castle so he hired a wizard with magical paints to enhance his chair with a unique trap. The wizard infused the back cushion of the chair with magical paints and inks derived from animal fats. The result is an invisible, arcane bacon grease that will secrete from the cushion and coat the backside of whoever sits on the throne without first deactivating the trap.

Past or Present? Is this throne room set in present time where the king or noble is still ruling or perhaps this room has been abandoned for decades/centuries and is discovered by the adventuring party? How will you use this trap?

Make it your Own: Is the throne magical? Perhaps it enhances the noble’s persuasion ability allowing him to roll with advantage. Anyone who sits in the throne for 10 minutes or longer could also receive this charismatic blessing allowing advantage on persuasion or intimidation checks for 2d12 hours. If the trap is not deactivated beforehand, however, no magical properties are obtained and only the effects of the trap are endured.

If you want to see the live demonstration on how the trap works, full details are in the video.

Trigger. Sitting on the throne triggers the trap releasing the greasy inks that are infused in the chair’s cushion. Whoever triggers the trap will not be able to feel, smell, or see the grease. They will be oblivious to its effects.

Effect. The victim’s back is coated with an invisible, greasy ink that smells like bacon. This is a scent they are oblivious to, but everyone else within 120ft will be able to smell it. The bacon scent and ink on their back will last for 4 hours. During this time, they will have a -10 penalty on stealth and may attract wandering monsters that are hungry and love bacon.

To help the players determine what is going on, consider allow a few passive ability checks. A passive perception 15 by other characters will notice the scent is coming from the affected character and that there is an invisible substance on their back. A DC 15 passive investigation will allow them to determine that they contracted it by sitting in the throne.

The bacon grease will attract a wandering monster of your choice. Ideas for monsters would include 2d4 guard dogs (using the Mastiff stat block in the Monster Manual), 1d4 Death Dogs (Monster Manual page 321), or other monster of your choosing that would be deployed in the area to guard the palace. If this is an abandoned castle we could use undead dogs that awaken at the smell of bacon.

If the bacon-infused ink is not removed within an hour, the grease will coalesce and spawn a Bacon Grease Ooze. 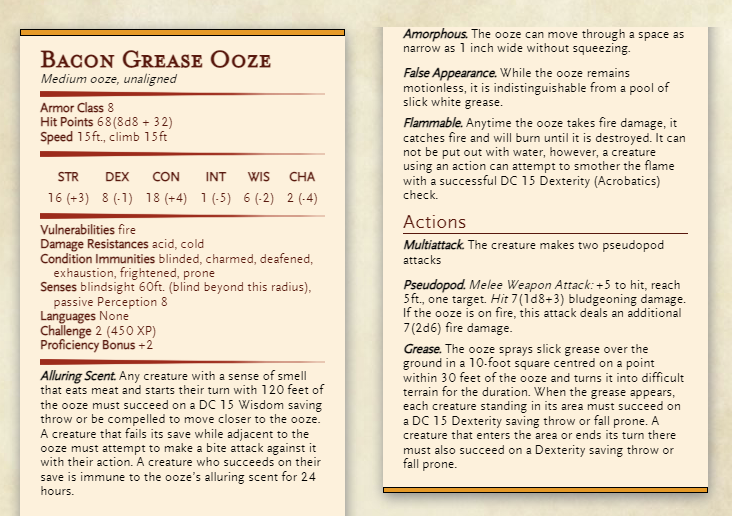 Countermeasures.
There is a hard-to-find indentation on the side of the throne that is the width of a finger. Placing a finger on this indentation will deactivate the trap. This can be found with a DC 15 perception check. If the indentation is found, then a DC15 investigation check can be rolled to determine how to disable the trap. Casting a Detect Magic spell will reveal Conjuration Magic. Submerging in cold water for 10 minutes will remove the grease from their back and it will break off in chunks of lard becoming visible as it separates.

What do you think of the trap? Is this something you would use in your game and if so, what would you do differently? Be sure to leave a comment below with your own thoughts and ideas.

On to the next!
—wallydm