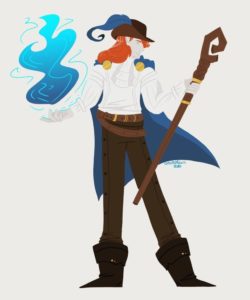 APPEARANCE: Auroris is a changeling who takes the form of a rather lanky and pale Elven man with storm blue eyes, mid- length amber hair that has whispers of white hair tucked in his feathered hat, a ruffled white shirt, a dark blue-cyan cape that reaches past his lower back, Dark buckskin pants, and a nice pair of boots.

VOICE: His voice is a lower-pitched, slightly Scottish accent. He also likes to talk fast and loud due to his constant preforming. He is cunning and will use your words against you if he doesn’t get what he wants.

PERSONALITY: Bubbly and Outspoken. He loves to make a scene and make everything about him. If you are on his good side, he may cut you a deal on his supplies and let you be a part of his act. He also loves money and that is why he keeps doing what he does.

LIFE: He goes from town-to-town as a magic act. His signature trick is to bring someone up to the stage from the audience and shift into them. He lives his life on the run to avoid being exposed as a changeling.

Auroris owns a traveling wagon that houses a magic shop. He can be found during the day selling magic items out of his wagon and then at nights he goes to the town squares and does magic shows. He sells various magic components and focuses. The most interesting item he sells are a scroll with “Programmed Illusion” for 45 gold. Other items he sells are a piece of limestone with magic runes carved into it, which can be used as a focus, hand carved wands made from hickory branches, and Alchemist’s Supplies.