Agent E
BOOK: The Grimioir of Galavant G. Gustavo the Notes on elongated life
A corporate spy infiltrating the Izzet League . He’s the type of guy who magic Auras his spell book every night before bed

Agent Y
BOOK: The Writings of Shan Yu, A Warrior Poet who wrote volumes on War, Torture and limits of Mortal Endurance. for example “Live with a man 40 years. Share his house, his meals. Speak on every subject. Then tie him up, and hold him over the volcano’s edge. And on that day, you will finally meet the man”

Agent N
BOOK: “Slaying of the Worldspine Wurm” is Nivod’s favorite book. A historical fiction about the guilds working together to defeat the wurm that threatened to devour Ravnica itself.
BACKSTORY: he is good with numbers and is intelligent so initially went to work for the Orzhov, starting from the bottom as a clerk. He soon realized how deep the corruption went in the Orzhov and decided it needed to be exposed. He had a big plan to expose their actions and went to the Azorius only to find out they had been paid off as well and turned a blind eye. He was fired and left feeling betrayed by the system as a whole.

He started digging into ways to make these sorts of problems facing Ravnica better. He had already seen corruption in the other guilds, but when he stumbled upon the truth of the Dimir he felt hope and decided to join the cause. Now he does their bidding to help make Ravnica better – dealing with the corrupt and scheming members of the other guilds. He sees himself as a vigilante of sorts and the ends justify the means. 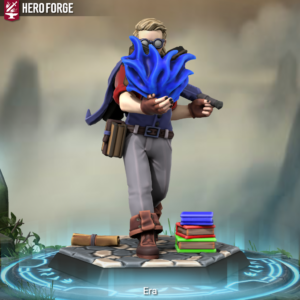