Today we take a look at a Fallen Aasimar Death Cleric / Rogue by the name of Dmitri. This 5E character build will be dripping with Necrotic energy goodness as we discuss all of our choices that blend into a fun, synergetic Necromancer. We’ll also explore a backstory that will reflect why this character is built the way it is and include role-playing possibilities along with his relationship with his deity. Let’s animate a few skeletons and take a look at this thematic Necromancer!

Dmitri is a Fallen Aasimar that is human in appearance with the exception of his dark purple eye color and jet black hair that shines like metal. He will habitually slide a metal comb through his front bangs that slant down and end just above his left eye. Dmitri has an uncanny knack for being able to read people and determine whether or not folks are truthful, lying, or hiding something.

Dmitri was raised in the city orphanage and has no recollection of his birth parents. The only item that ties to his parents is a gold necklace with a triangle. In the early years, the orphanage was good and he had a special caretaker that seemed to favor him. She was older, however and passed away from old age. The orphanage exchanged hands and the two new caretakers, while keeping a positive social image, had a dark, deranged method of caring for those that depended on them. 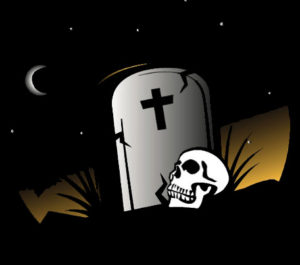 During this time, Dmitri became the target of three older kids that took to an ongoing bullying campaign of the Aasimar teen. The event that shaped Dmitri’s path, however, was one night the elder kids deceptively befriended him and the four visited the city’s tombs of the dead. They slipped through city security and explored the grounds. They found a hidden passageway and descended the stairs into a chamber with shackled skeletons. The kids in an evil turn of events, shackled one of Dmitri’s arms to a wall.

However, their plan to leave Dmitri stranded in the chamber of the dead took a twisted turn. The entrance slammed shut and within moments animated skeletons attacked the young lads. Dmitri, using his metal comb, was able to pick the lock of the shackle moments before the sword of a skeleton was about to impale him. He grabbed a nearby shield and deflected the next attack. His eyes darting about, he seen that his three fellow orphans had already perished and the undead were now locking in on his position. Using his ability to see in the dark, Dmitri made a run for it, and slipped through a nearby passageway.

Dmitri traversed the underground channels for hours. He eventually found another secret passageway that led to a chamber that had been abandoned for decades. There were a few skeletons in here and it seemed to be an ancient temple room. It is here that he found a triangle shaped box, lined in black velvet with a human skull inside. The same symbol that was on the shield he was carrying. 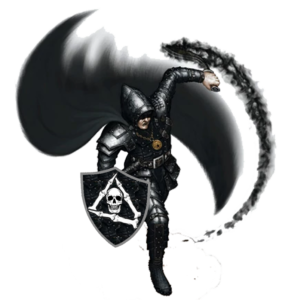 Dmitri made the decision not to return to the punishing environment of the orphanage and made this new found chamber his home. Dmitri would frequently travel the city streets relying on his agility and stealth to acquire food and items.

He found solace living among the dead and spent the next few years studying the books and prophecies of Myrkul, god of death, lord of bones. Myrkul would occasionally begin conversations with Dmitri through the skull in the triangle box. The conversations were interesting, to say the least as Dmitri was able to keep his thoughts balanced and did not sway towards good or evil.

One day, Myrkul called to Dmitri. A grave has been disturbed in the city cemetery. Dmitri agrees to help. He feels divine power rush through his system. The powers of healing and light as well as the powers of darkness and death. He grabs his shield and rapier and steps forth to investigate…